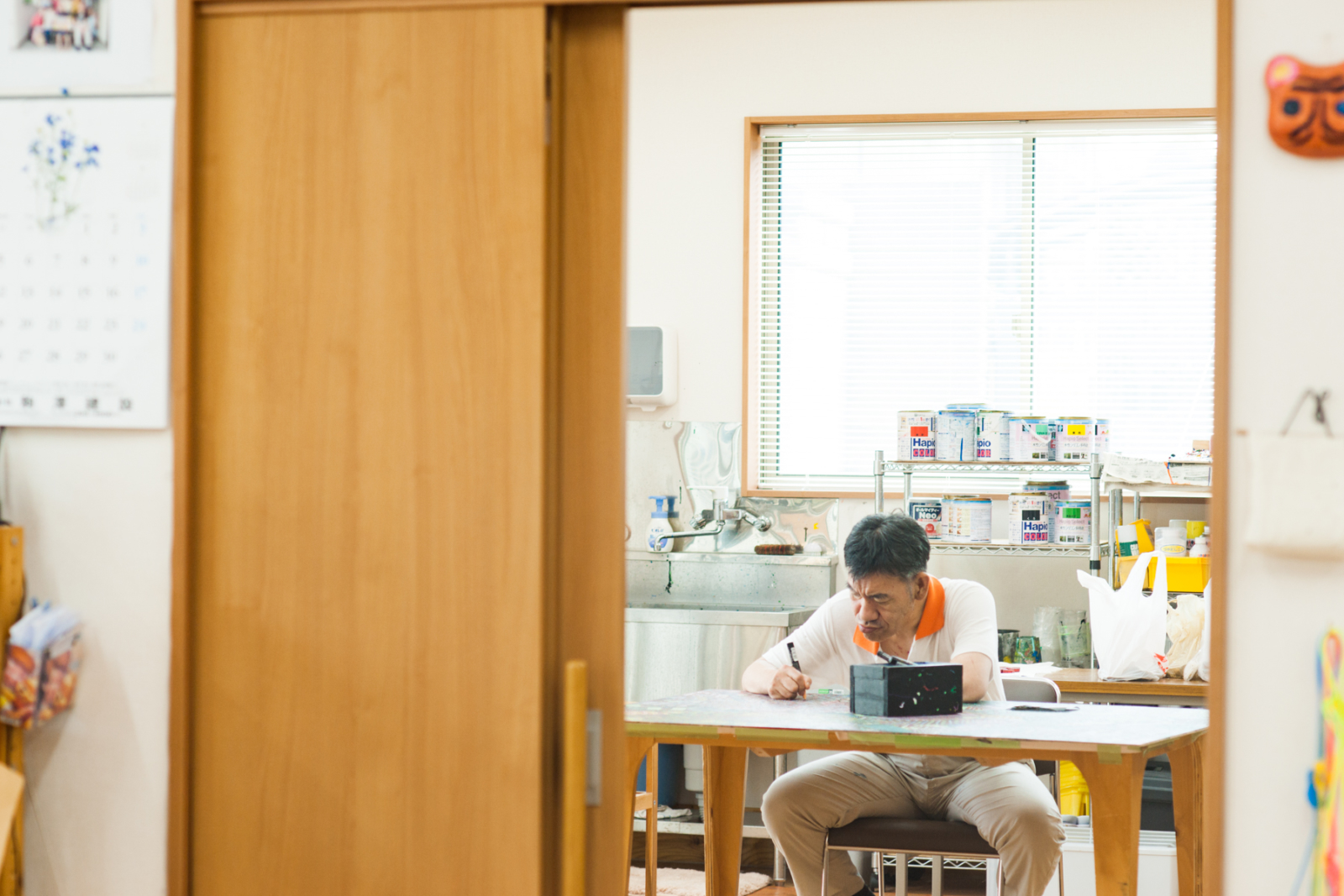 To draw because he wants to be “recognized” – Although this could become a distraction for an artist, Mr. Nishikawa’s drawings also embody a primitive feeling within.

This article is a translated version, which was originally published in Japanese language on 01 September, 2017.

When raw emotions are made in dots.

“The person in the back is Mr. Nishikawa.”

When I looked into that direction, I saw him hunched over a large wooden panel that covered the whole table, concentrating on drawing dots.

Mr. Yasuhiro Nishikawa is one of the artists at <Kobo shu>. I once had a chance to look at a book with a collection of his work. They were dot paintings with a skillful use of different colors. Some of the work give an impression of the organic movement of flowers and plants, and others look like cells that draw the viewer into a microscopic world that cannot be see with naked eyes. The director of <Kobo shu> told me that Nishikawa’s work resonates with the cosmology of the aboriginal artists, and this made me presume that he would be a quiet and contemplative person in real life.

The dot painting that he is working on now seems like it is nearly finished with hardly any space left. When he was told that we were here to interview him, he suddenly shifted his focus as through a switch was turned on.

“How did you find out about my work?”

“What made you curious about my work?”

“What do you want to do with my work?”

Before we could, Nishikawa bombarded us with his questions.

While we were taken aback and trying to answer his question as best as we can, one of the staff members stepped in and said: “Just the other day, Mr.Nishikawa’s work was exhibited at a gallery in Omotesando and a famous singer bought his work. That person also visited us here, so this made him want more, isn’t that true Mr. Nishikawa?” From this interaction we could sense that Nishikawa and the staff members were close like a family.

How fulfill the desire to be acknowledged?

Nishikawa wanted to draw and make that his profession, so he applied to <Kobo shu> on his own after researching online. That was 14 years ago. He was born into an elite family with strict parents and high standards that he had live up to. This led to a worsening of his Attention Deficit Hyperactivity Disorder, and he had moved between various psychiatric hospitals and welfare facilities for more than 20 years. At every facility the staff would distance themselves from Nishikawa and treat him like a nuisance because he was not good at controlling his emotions.

“When he first came to <Kobo shu> it was also difficult. Our staff would talk to him one-on-one for two hours every day, but even then he would erupt with anger saying: “Acknowledge me!” One time, because he is big, he got in to physical fight with one of our male staff members. However, Mr. Nishikawa’s adamant demands are reflections of his desires to interact with people and be recognized. We realized that we can’t just deal with him by just getting by each encounter, but continue to engage with him, and this eventually led to a balance between his emotions and creativity.”

Nishikawa’s work that is now highly praised and is exhibited a both domestic and international galleries, make the staff member who experience the hardship together happy for him like family. Perhaps this is also fueling Nishikawas’s creativity.

“I don’t decide on what I want to draw. It’s just takes its course. If I decide, many things will fall apart, and I wouldn’t be able to express myself. I want to be free. I want to draw freely. Here, they except things that I can do and things that I can’t, and help me extend what I am good at. I was able to have a proper life again. I couldn’t do this at school or at the hospital, but here I can. I hope that one day I can talk to a celebrity or a female interviewer my experiences” says Nishikawa.

A staff member immediately comments: “You don’t need the last part. It was such a good story until said it!” [Laughs]

Unfortunately, his parents have passed away, but his relationship with his siblings and relatives have gradually improved through the external recognition of his artwork. This year he was able to give his niece “Otoshidama” (New Year’s money gift) from the income he made from selling his work. Nishikawa’s work is also gradually changing from the mental satisfaction that he is gaining. However, I don’t think that his previous work gave an impression of madness or depression either. I think it’s the opposite. Nishikawa’s dot world seems to be a completed resolution towards his emotions that are always expressed 100%. The relationship between people’s emotions and art is even more puzzling and never seizes to be interesting. 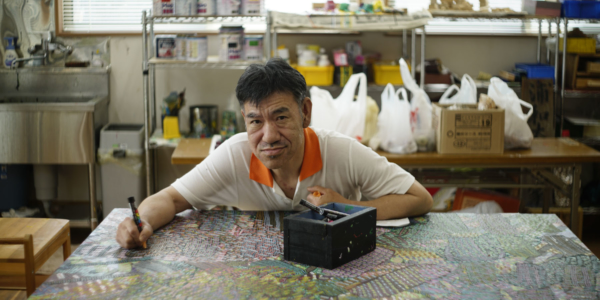 Born in 1960. From a desire to make a living from art, he found <Kobo shu> on his own from books and the Internet and became a member in 2003. In 2008 he had his first solo exhibition ‘Everything About Me’ at <Kobo shu>’s gallery and in 2010 he exhibited at <Miyako Yoshinaga Art Prospects gallery> in New York. In 2011 he showed his work at ‘outsider art fair 2011 7W New York’. Since then he has participated in many exhibition in Japan.