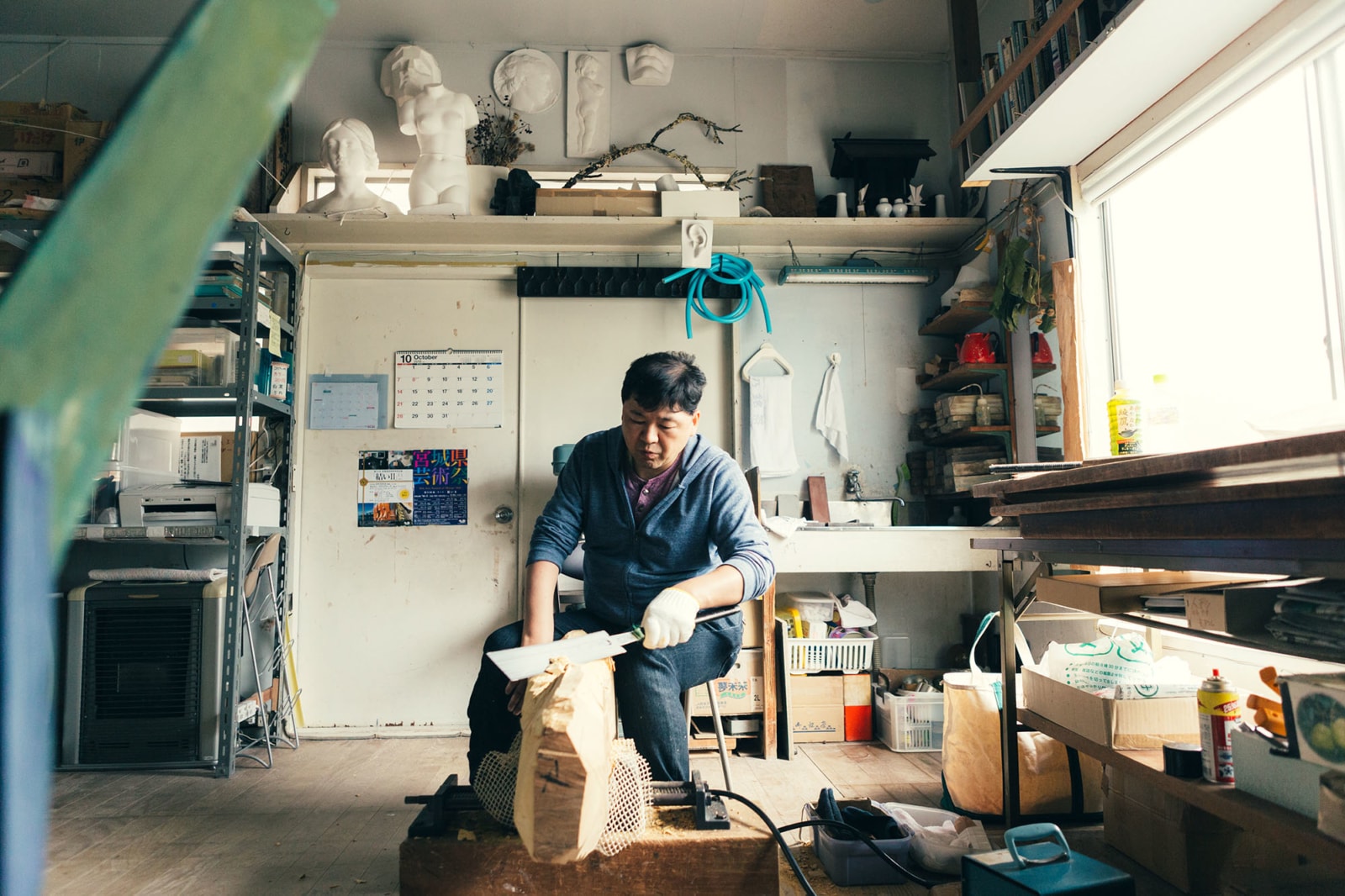 Since the age of 25, MATSUURA Shigeru has focused on one creative theme: the Earth. Carved with his left hand alone, his wooden sculptures overflow with vital energy.

This article is a translated version, which was originally published in Japanese language on 28 January, 2019.

Carving Out a Piece of the Earth with His Left Hand

Based in Sendai, Miyagi, MATSUURA Shigeru first discovered the art of wood carving during rehabilitation at a hospital after a cerebral hemorrhage at 19. He has continued his creative endeavors since, using only his left hand due to the ongoing effects of his illness. His one-handed technique was learned from a plastic arts teacher who Matsuura met at a culture center during his period of hospitalization and still takes lessons from today. A vice holds the wood in place as Matsuura shapes it with saw or electric chisel.

One reason Matsuura’s works catch the eye is their color. Rather than primary colors, he mixes multiple watery paints and coats the wood in layers. Sometimes he uses a brush, and other times his fingers, as if repeatedly caressing the piece. The carving process leaves the surface of the wood uneven, so a single coat is not enough: multiple thin layers create rich, light color schemes.

When Matsuura first began carving wood, he focused on specific, representational motifs like flowers and birds. Today, however, his interest is moving more toward abstract, rougher carvings. ‘If I’d just kept on creating exact replicas of things, I might have eventually gotten bored and given up wood carving altogether,’ he says. ‘I think there’s a kind of “leisure” in abstraction. After the onset of my condition, I realized that I now had more “leisure,” too, and wondered if more abstract works might not suit me better.’ He describes one of his works from that transitional period, 《Dove》, which mixed representation with abstraction but was lost during a move when about seven-tenths complete. I cannot help but regret that I cannot see what it was like.

‘Since my operation at 25, my work has always taken the Earth as its theme. This was right around the time of the Gulf War, the Tokyo subway sarin attack, and the Great Hanshin Earthquake. It might have been a coincidence, but as this series of destructive events continued, I began to wonder what “the Earth” really was.’

Creating Things Because of Restricted Freedom to Move

Matsuura’s current work in progress, 《Hope》, represents brightness rising toward the heavens. It was inspired by Easter Island’s Moai statues, which he saw on television and took a liking to.

‘When I begin a new piece, I start by making lots of sketches,’ Matsuura explains. ‘For 《Hope》, I also made a smaller study using leftover materials. I began work on the sculpture itself about half a year ago.’ It takes him roughly ten months to complete a piece, he adds.

He enjoys seeing artwork by others, and has visited many art museums with his family, even in relatively distant locations like the island of Naoshima in Kagawa. His favorite artists include OKAMOTO Taro and Anthony CARO. He was particularly taken by Okamoto’s 《Tower of the Sun》, and has even created a work of his own based on it. His meeting with the tower was an earth-shaking event for him. He happened to spot it among the scenery while traveling from Osaka to Lake Biwa, and had the driver stop the car right on the spot. His process, he says, often involves reconstructing forms he has seen elsewhere with his own wood carving techniques.

Matsuura is also a fan of Enku, the seventeenth-century Buddhist sculptor and priest who produced an estimated 120,000 works over the course of his life. Enku was known for taking materials that would usually be discarded and carving them into buddhas, and Matsuura takes his cue from this, too. If a piece does not readily adopt the form he first envisioned for it, he does not give up: he repairs it and adds to it, giving it a new sense of presence.
‘I think that my restricted freedom of movement is exactly why I want to create things,’ Matsuura says, as he works with quiet focus on carving out another piece of the Earth.

Special Thanks to ABLE ART JAPAN 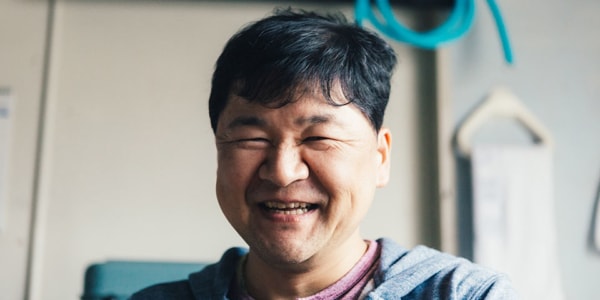 Born 1971 in Miyagi. First encountered wood carving during a four-year rehabilitation period following a cerebral hemorrhage in 1990. After being discharged from hospital, began attending the wood-carving school 〈Atelier So〉, and has produced roughly one sculpture per year since. Due to partial paralysis, works only with his left hand, and has arranged his tools and workshop to facilitate this. Uses watercolor paint to add bright, gentle colors. Used an electric chisel and made many small, rounded sculptures in his early period; currently works mainly with saw and axe on larger pieces. Received the Miyagi Prefecture Award for New Artists in 2017.