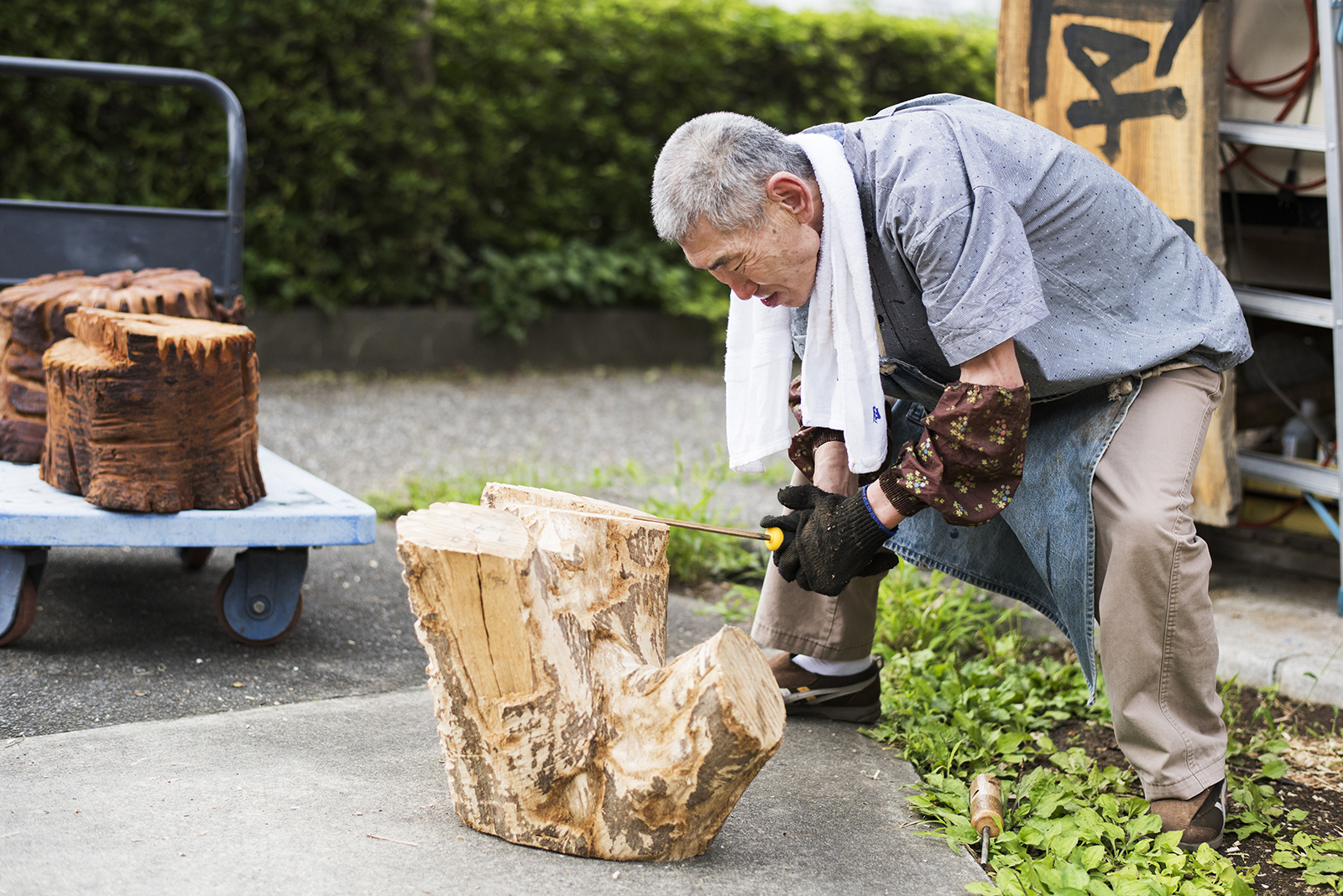 From such as small body, where does all this energy come from? As if possessed, the hand files away at the tree stump.

This article is a translated version, which was originally published in Japanese language on 25 December, 2019.

To carve is to draw

Since he joined the Yuai Gakuen Children’s Class, Otake has lived with woodwork. While being involved for a long time making duckboards for a company in the city of Ome, he also makes unique artwork from tree stumps using a file.

OYA Masashi who has supported Otake’s activities for more than 10 years at 〈Kobo YUAI〉says: “His passion to saw the tree was too strong that he once cut himself. Otake-san calmed down a bit after we gave him a file instead.”

The scrap wood from the nearby furniture factory that is provided as firewood is like treasure for Otake. Oya says: “It seems like the bigger the wood is the better it is for him. He will keep carving it with a file, sometimes up to 6 months.”

Otake never stops to carve midway. When there is nothing left to carve he will find a new stump, which is the sign that the artwork is done. For him, wood is like a canvas and the file is like a pencil. When you realize that for Otake “nothing left to carve” means “no space to draw”, it feels like you are starting to understand him better.

To be proud and insist is what creates the artwork

When we were observing Otake’s work at the woodworkshop, he suddenly pointed to another member carving a tree stump with a chisel as though he was trying to tell us:
“That’s my student. Pretty good, right?”

Then Otake pointed to a flyer posted on the wall that had his work largely featured in the layout. We could hear his inner voice telling us: “That’s my work, isn’t it wonderful?”

Oya tells us: “Otake-san is proud that he has been in this wood workshop for a long time. Even though we can hardly communicate through words, he insists that he has to work with wood. We can just feel it.”

It felt as if the respect from the staff, enabled Otake to fulfill his desire to work and cut wood with the file.

Using a handmade grip that the staff prepared on a smaller file for more detailed work, Otake continues to draw on the wood canvas. 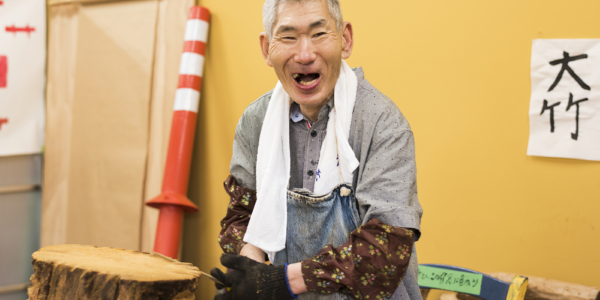 Born 1949. After learning how to work with wood tools from making firewood and duckboards, he now makes artwork from tree stumps. Otake hangs a towel around his neck and uses two types of files to face broadleaf tree. When he starts on a new artwork, he prefers a large piece of wood. He takes a leadership role at Yuai Gakuen. He likes to watch detective shows and human drama, and has a strong sense to maintain order and justice, often helping other members.