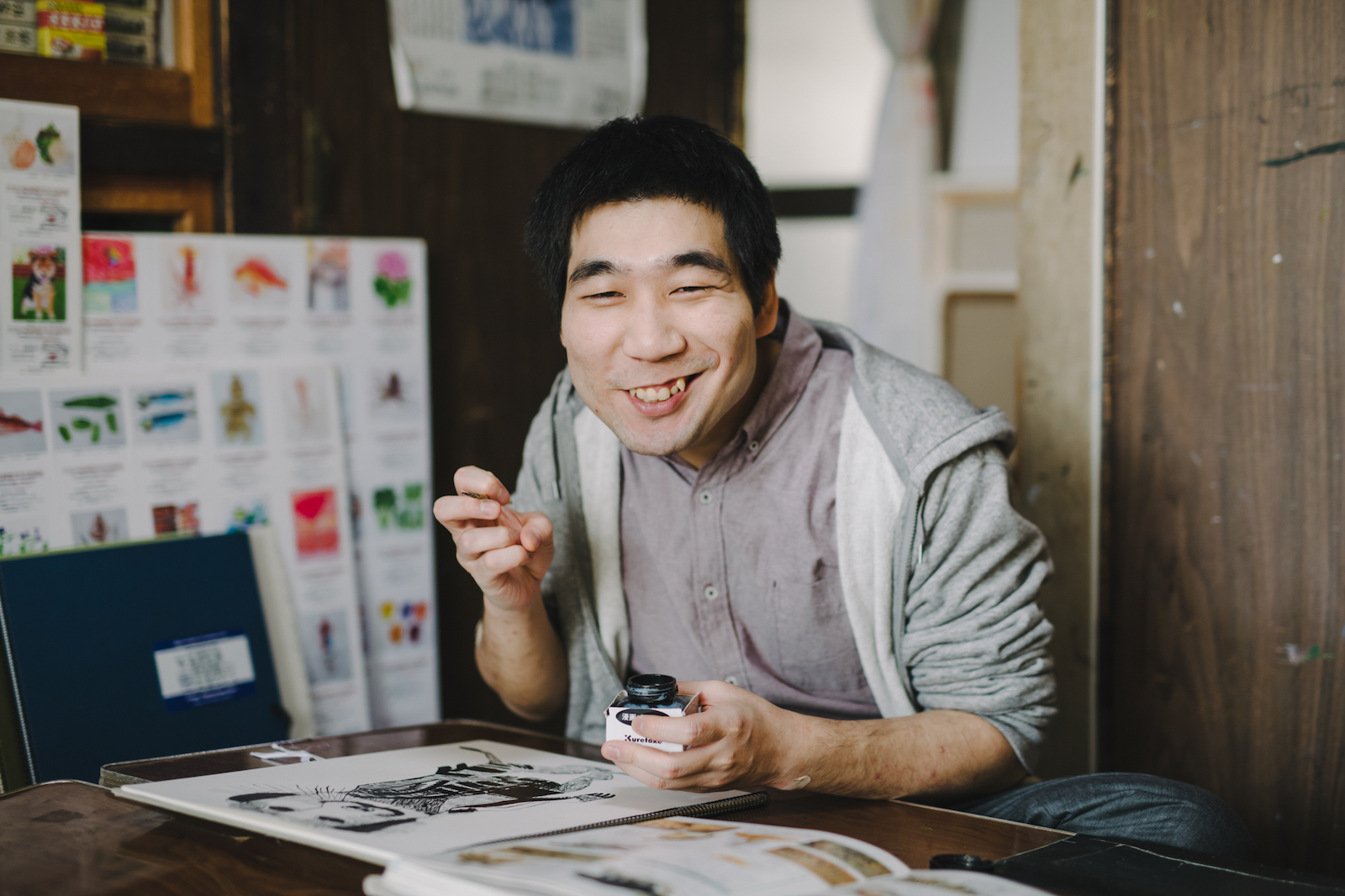 “Sato-chan, it’s about time to finish.” The time when HIMENO Satoru puts down his beloved bamboo pen is the time when the teacher of his painting class loses his concentration.

This article is a translated version, which was originally published in Japanese language on 27 March, 2020.

“From the moment I give the subject matter for the drawing, Sato-chan (Himeno’s nickname) always begins without sketching. It’s like he is drawing with excitement each and every moment. I’m not sure how to describe it, but his unbalanced feeling ends up being the balance of his pictures, and that’s what makes his drawings so attractive. So basically my role is just sitting next to him like this (laughs). When I sometimes think he has painted too much, I just say things like, ‘Sato-chan, let’s stop here. You don’t need to paint a face.’”

Apparently, Himeno was good at using scissors from an early age and folded balloons and cranes precisely. After his mother Chikako observed him doing it, Himeno started drawing following her recommendation. From around the age of 13, he started going Tanaka’s class. At first, he began by drawing things around him including scissors and a stapler, and then the subject matter of his drawing gradually become more diverse to include fish, vegetables, plants and animals as well.

“Initially I got him to paint watercolors starting with pencil sketches like other children do, but I eventually suggested ink drawing. That’s because I felt there was potential in his ink drawings. I was really convinced that ink drawings would develop his originality further, and he could create masterpieces which no one else can imitate.”

Since then, Himeno has become focused on drawing pictures using a bamboo pen and cartoon ink at the painting class, and his painting has been gradually recognized by society. He was selected to be a registered artist among many candidates from all over Japan as a company artist at Able Art Japan which supports the talents of artists with disabilities. In 2019, his original picture was displayed at Starbucks Coffee Beppu Park branch. This February, he also participated in the ‘Oita People with Disabilities Art Exhibition Vol. 1 Daily Art Bokura no Sekai(Our World)’ held at the Oita Prefectural Art Museum (OPAM).
“Sato-chan’s work is becoming recognized by society, so I’m really pleased,” said Tanaka with smile, and Himeno looks forward to going to his painting class more than anything else.

“As he personally always wants to go, he has never missed the painting class. When Monday comes, he loads his art materials into the car and lets me know he is going toMr. Tanaka’s place again this week (laughs). As he is like that, I used to stay with him when he began going to the class but only drop off and pick up these days, and leave everything else to Mr. Tanaka. In fact, I think that spending time with Mr. Tanaka is what built the foundation for Satoru’s drawing.”

Chikako studied design when she was a student and supports Himeno’s expression activities with all her might, saying, “As I like the world of expression, I might be enjoying it more than anyone else through my son’s paintings.”

“Sato-chan, it’s a bit thick. Shall we change it?”

When Tanaka spoke to him, Himeno gently put down his bamboo pen. Other students come into the classroom. Looking at the students and smiling, he turns his attention to his drawing once more. After a while, he showed us the drawing of a meerkat which he has been working on since last week and is now completed. 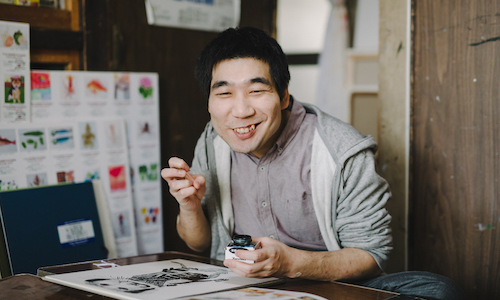 Born in 1991 and lives in Beppu City, Oita Prefecture. He was good with his hands so began drawing following his mother’s recommendation. From around the age of 13, he started going to a nearby painting class run by TANAKA Iwahisa. Starting with the ‘Himeno Satoru Art Exhibition’ at the Piano Café and Gallery in 2010, he has participated in a number of group exhibitions including the ‘Genki No Deru Art! Exhibition’ (Art Plaza in Oita City, Oita Prefecture).