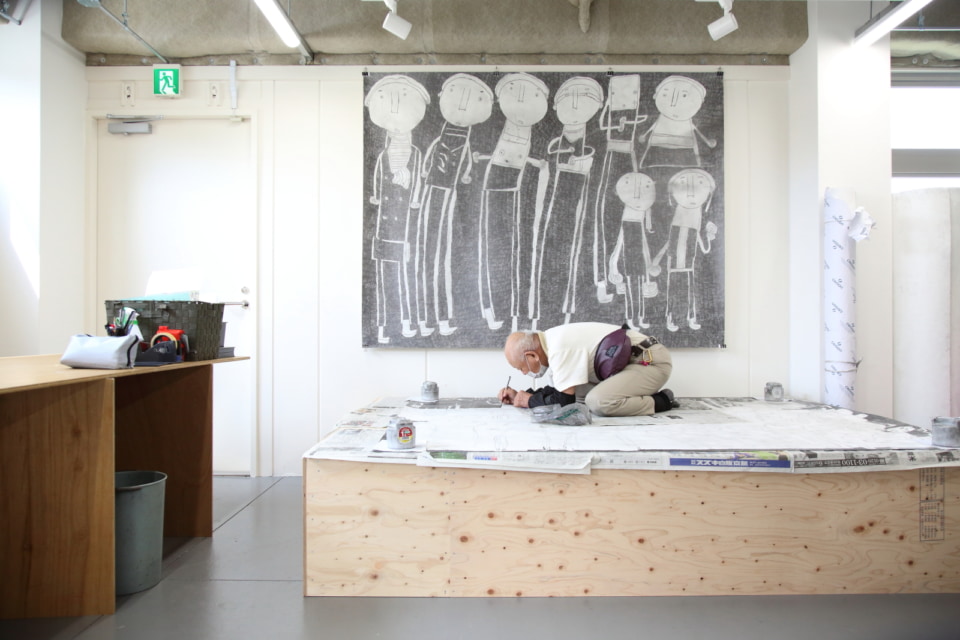 (About this story)
His 10B pencil gliding across the paper, INOUE Masaru serenely pursues his drawing on a sheet of rolled paper spanning two meters in width. You would never guess from his commanding drawing style, but Inoue only began engaging with art in earnest at the age of 70, after many years as a manual laborer and café employee. It has been approximately seven years since he began drawing. Inoue’s gentle, kind personality shines through in his works. We visited Inoue, still creating his enormous pencil drawings today, at〈Atelier Yamanami〉(Shiga Prefecture).

This article is a translated version, which was originally published in Japanese language on 28 September, 2020.

Simple group scenes brought to life in 10B pencil

We are shown to a space around the size of three tatami mats (approximately 4.6 square meters). Atop a platform, a man draws intently with a pencil. Newspaper has been laid over a sheet of paper big enough to completely cover the platform. His hand moving continually, the man sits on the newspaper to avoid smudging his drawing.

Arm sleeves, work clothes, and a fanny pack make up his daily uniform. Inoue kneels with his hips in the air to run his pencil over the paper. With a scritch-scritch-scritch-ing, he draws his lines in a soft 10B pencil.

His pencil strokes are short, each line neat. His arm sleeves seem to be performing an essential role in avoiding smudging his pencil and marking the paper.

People are the main motif of his pencil drawings, gathering into crowds. Inoue’s simplified human figures look like statues of the Buddha or Jizō, guardian deity of children and travelers. I feel the power of the uncontrived innocence of his drawings—if Picasso and Miró could have seen Inoue’s works, I suspect that they would have been envious.

Since beginning these large-scale drawings, Inoue seems to delight in adding to their number. I am told that he can currently boast a total of 145 pieces, increasing the count one drawing at a time. I wonder how many people he has drawn—how many he will go on to draw?

Inoue has about him something of the early Edo-period Buddhist sculptor, Enkū, who is said to have carved 120,000 statues of the Buddha over the course of his life. Drawing intently with head down and hips raised, Inoue’s posture reminds me of the position for prayer.

An artistic talent that lay dormant for 70 years

Inoue’s history with art is a short one. As he turned 70, his life saw a significant change. At the time, he was working as an employee at Café Castanet in the municipal facilities of Konan Town (an area of Koga City, Shiga Prefecture) and did not spend any time drawing.

His gentle and earnest personality seem to have made him popular with customers. However, the café, where he had worked for ten years, ended up closing its doors.

In consideration of his age, a senior care home was discussed. There, he would be able to live in comfort, with no further need to work.

Before coming to〈Atelier Yamanami〉, he had been involved in construction work for many years. His sturdy build makes it easy to picture the years of hard work he must have contributed since he was a young man.

Didn’t he deserve to live out the rest of his life in relaxation? This was the thinking behind the proposal of the care home, yet Inoue adamantly refused to agree to this plan.

His insistence was rewarded, and he became a member of the Atelier’s creative group Korobokkur.

“He didn’t really draw when he was working at the café. At the most, he would dash off a little drawing if the shop was quiet,” says center director YAMASHITA Masato.

No one had any idea of Inoue’s artistic talent.

With almost no experience in drawing and painting, what artistic activities would Inoue be drawn to?〈Atelier Yamanami〉offers various types of activities, including drawing and painting, sculpture, and textiles. But would a man who had spent 70 years without creative activity produce anything? The history of art provides an answer to this question in the example of English ship chandler Alfred Wallis (1855–1942), who taught himself to paint in his seventies. Age is irrelevant when it comes to a turn toward art—a lack of experience means anything is possible.

The first drawing materials that Inoue took up were India ink and disposable chopsticks.

When drawing lines in ink, drips and runs add unpredictable interest. But despite their appeal, these materials involve calculations of drying time and working within a fixed area: disregarding the confines of the drawing surface lets lines fly off the paper and stain the surrounding area.

These materials may be a little hard to manage, but seem to be rewarding once you have tamed them and tapped into their fun.〈Atelier Yamanami〉 also boasts a master of India ink and bamboo chopstick sketches in the form of OKAMOTO Toshio.However, Inoue did not take to India ink.

What would be the right material for him?

One day, Inoue picked up a dark pencil and his expression changed. Unlike the time he had spent struggling to get to grips with India ink, he seemed to be having fun as he drew.

The paper didn’t seem large enough for his images, so that too was swapped for a larger size. Aiming to match the dynamic worlds Inoue was creating, staff prepared sheets of rolled paper measuring 10 m by 152 cm.

Confronted by these enormous sheets, Inoue simply commented, “that’s big”—it seemed that the staff had gone a little overboard. In the end, sheets of a more reasonable two meters wide were settled on.

This seemed to be the ideal size for Inoue. With the help of staff members’ enthusiasm and support, Inoue’s creative life had begun.

Ten pencils go into the making of a single work

He begins by drawing his human figures. Once he has created their outlines, he kneels in the formal seiza position at the corner of the sheet and leans forward, as though bowing, to run his pencil over the paper.

Inoue will use a pencil down to a stub in one day, over the course of three hours of creative work. After ten days, his drawing will be complete. When the lead of his pencil is worn down, he sharpens it meticulously with a utility knife taken from his fanny pack, carefully tidies the shavings away in a plastic bag, then returns his pencil to its holder and begins drawing anew. His methodical nature is clear to see.

Inoue tends to draw quietly. He may seem the type of artist to be absorbed in his work to the exclusion of all else, yet he will check in with other members in the studio if they seem down, and chide noisy people, demonstrating his inherent sense of fairness.

Even as he plunges into the work before him, he keeps a close eye on those around him. Is he showing his pride in his seniority? It wouldn’t be surprising, with Inoue’s prewar birthdate making him the eldest member of the Atelier.

I asked the center director what kind of person Inoue is.

“Inoue-san is 100 percent himself,” Yamashita says fondly. “He is completely genuine. He doesn’t worry about what people think of him. His kindness shines through directly in his behavior. You and me, we want to look good, we want people to think well of us, don’t we? He doesn’t bother with any of that. The word ‘winner’ could have been made for him. He draws happily, he’s loved. Is there any greater happiness?”

Inoue is 100 percent himself

Inoue was invited as an artist to an exhibition held in Hong Kong in April 2019.

“When we were told that they wanted to invite an artist from〈Atelier Yamanami〉, we strongly suggested Mr. Inoue. It was his first time traveling abroad,” Yamashita tells me happily.

What fresh stimuli would Inoue encounter in a new environment? I’m sure that Yamashita had his own hopes. However, even in a new setting, “Mr. Inoue was Mr. Inoue.”

A public art space was set up exclusively for Inoue inside the gallery, where he was able to draw. While the people of this unfamiliar country looked on, Inoue continued to draw as always, using up one pencil per day. Business as usual.

“The organizers generously provided us with a wonderfully fancy hotel, and the breakfast buffet was a sumptuous spread. When I looked over, wondering what Mr. Inoue would choose, he was eating a slice of bread and butter, just like always, haha! He never changes. Mr. Inoue is 100 percent himself.” (Yamashita)

Their lunch break is over, and Inoue returns to the workspace. He neatly lines up his shoes and climbs onto the platform. In his habitual pose, he slides his pencil over the paper.

His 10B pencil moves over the paper, leaving the outlines of his figures in white. Color rarely features in Inoue’s drawings.

Their tones are the black of the pencil and the white of the rolled paper. Yet Inoue’s life is vibrantly illustrated on this surface in dense pencil strokes. We find ourself wondering about the kind of life he has led. A man of few words, Inoue does not share much. The only answers to our questions are those to be found in his drawings.

The sound of Inoue’s pencil gliding over the paper reverberates through the studio, unchanging. 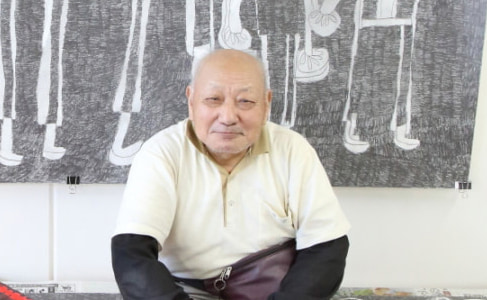 Inoue was born in 1943. He lives in Shiga Prefecture. He has been a member of 〈Atelier Yamanami〉 since 1999. He was over 70 when he began drawing. With the same earnest approach he brings to everything, he works three hours a day to complete works bigger than himself over the course of approximately three weeks, depicting human figures, animals, landscapes, and other motifs with neat, tightly packed strokes of a pencil, his only tool.

Anime characters, figures from ukiyo-e woodblock prints, dinosaurs, and supernatural beings (yōkai) from Japanese folklore crowd the scene. The worlds portrayed in the works of UKAI Yuichiro of〈Atelier Yamanami〉(Shiga Prefecture) are a confusion of …