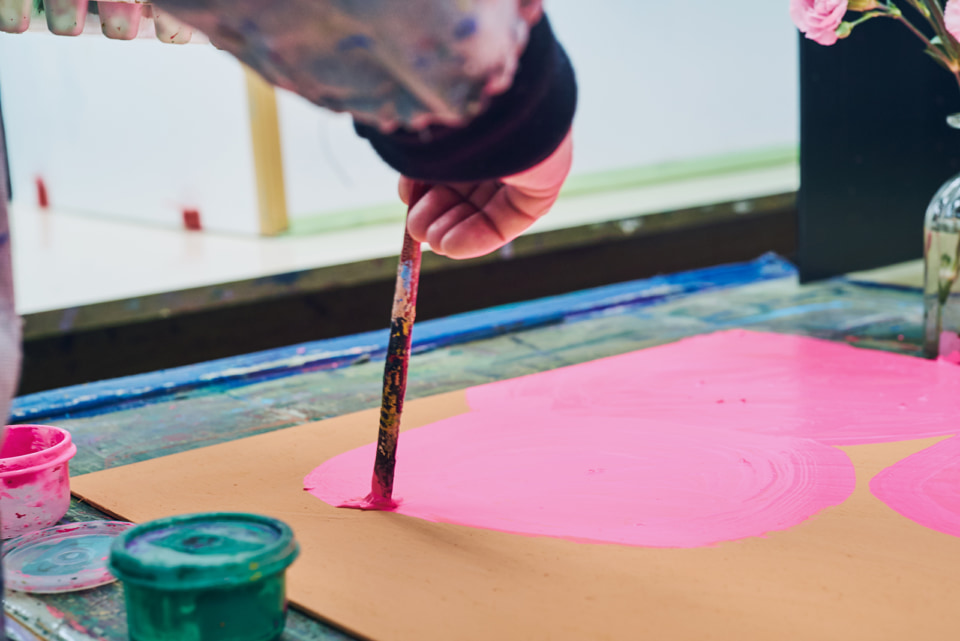 Immediately after graduating from high school, FUKUI Masahiro started taking an art class offered by the predecessor organization of 〈Artspace Colorful Institute〉 (hereafter, 〈Colorful〉) in Tottori City. Since that time, he has continued to attend once a week. Today, Fukui again gazes at some flowers in front of him as he makes use of an abundance of paints and allows his brush to run free.

This article is a translated version, which was originally published in Japanese language on 4 March, 2021.

The instant life is breathed into flowers

Fukui visits 〈Colorful〉 every Friday. Mornings are time for painting. On this day, there is a vase of carnations. Picking up a hearty dollop of pink acrylic paint with his brush, Fukui begins painting circles on veneer board with an orange basecoat.
He makes big circles and little circles. Before long, the board is covered with pink circles. Quietly watching from behind, I am unable to guess how the painting will end up.
Then I experience an instant of comprehension. Saturating his brush with green, Fukui adds several thick lines. Suddenly, the contours of flowers emerge, and life is breathed into the painting. I am overwhelmed with a sense of surging vibrancy.

Art is a means of communication

Fukui’s entry into the world of art happened one day after an exchange with his mother. While at home, Fukui came in carrying a tray with a box on top; “Boat?” his mother asked, and that is what it was.
Realizing that he was communicating what he was thinking, his mother wanted him to communicate even more, and brought him to 〈Colorful〉.

“There were things like rainbows and umbrellas. He came in with drawings that had this June atmosphere to them. They were wonderful, but he began coming here because that’s all he drew” says 〈Colorful〉Chairperson SENO’O Eiko, looking back on when Fukui first came.

Fukui tried things such as copying the works of Picasso, but his flower art was beautiful, and he came to focus on flowers in order to make art is livelihood. At first, he drew with poster colors on drawing paper. His style was different than it is now, and he used to draw the flowers’ stamens and pistils, and each petal one by one.

Gradually, he began to use more and more amounts of paint, and the paints peeling off of the drawing paper became a concern. He then began painting on materials such as canvas and cardstock.

“Veneer board worked particularly well, and it seems he really likes to paint on it. Paintings on veneer board are much more sharp than on paper. He also mostly paints with primary colors, but there is a little white mixed in with the basecoat so things don’t overlap. Although one time he painted blue flowers on a blue basecoat, and the flowers disappeared after the paint dried, haha,” explains Seno’o.

Fukui looks forward to a certain time in the afternoon. Focusing on a small piece of A5-sized backing paper on a large board, he makes bold strokes with pen or pencil.
What Fukui wrote without looking at anything, I found out, was a place he wanted to go to. I thought he was drawing a pattern, but he was in fact writing characters. In a short amount of time, he wrote the same characters on several sheets of paper. Making use of different angles with his pencil, Fukui wrote the characters while gradually changing the thicknesses of the lines. Sheet after sheet.
What is he writing, I wondered. Seno’o told me. “Ah, he’s writing ‘New Central Government Office Building.’ Tottori opened a new city hall building around the fall of 2019. He likes places with lots of flyers, and he sometimes writes ‘Chuden Fureai Hall’ as well.”

When it was still just an art class, Fukui attended for one hour a day, but after 〈Colorful〉 was established, he began attending for three and a half hours a day. Fukui was unable to accept this change, making his dissatisfaction known by saying, “I want to go home now. I want to go to Chuden Fureai Hall.” After Seno’o proposed channeling those feelings in a different direction by writing them, Fukui calmed down.

It’s in Fukui’s nature to treasure the everyday. I was told beforehand that Fukui was experiencing stress due to the unavoidable changes imposed by COVID-19, and interviewing him might be difficult depending on his health. As I was photographing him while taking care not to hinder his creative activities, however, Fukui suddenly presented freshly written “Chuden Fureai Hall” characters to the camera.
“He seemed quite happy. Interviews can be a burden, and I was watching carefully, but getting used to new things is not a bad thing for him. In part so that he can be independent as an artist, as well, I want to see him express himself even more,” Seno’o told me. Fukui’s everyday is expanding. 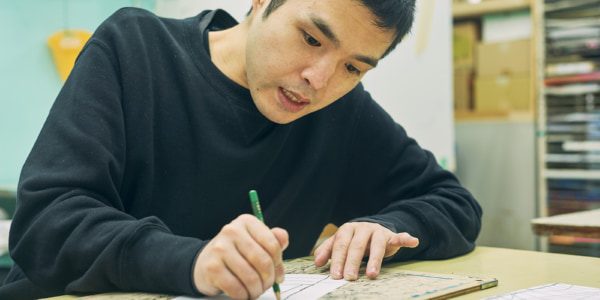 Utilizing acrylic paints and thick brushes, he creates powerful depictions of flowers and vegetables among other things. The contrast between the basecoat color and the things he paints engender Fukui’s unique worldview. In addition, his works featuring characters written with pen and pencil exude a similar style to that of the traditional seal script used in official document seals. Fukui’s fans refer to this as the “Fukui font.”