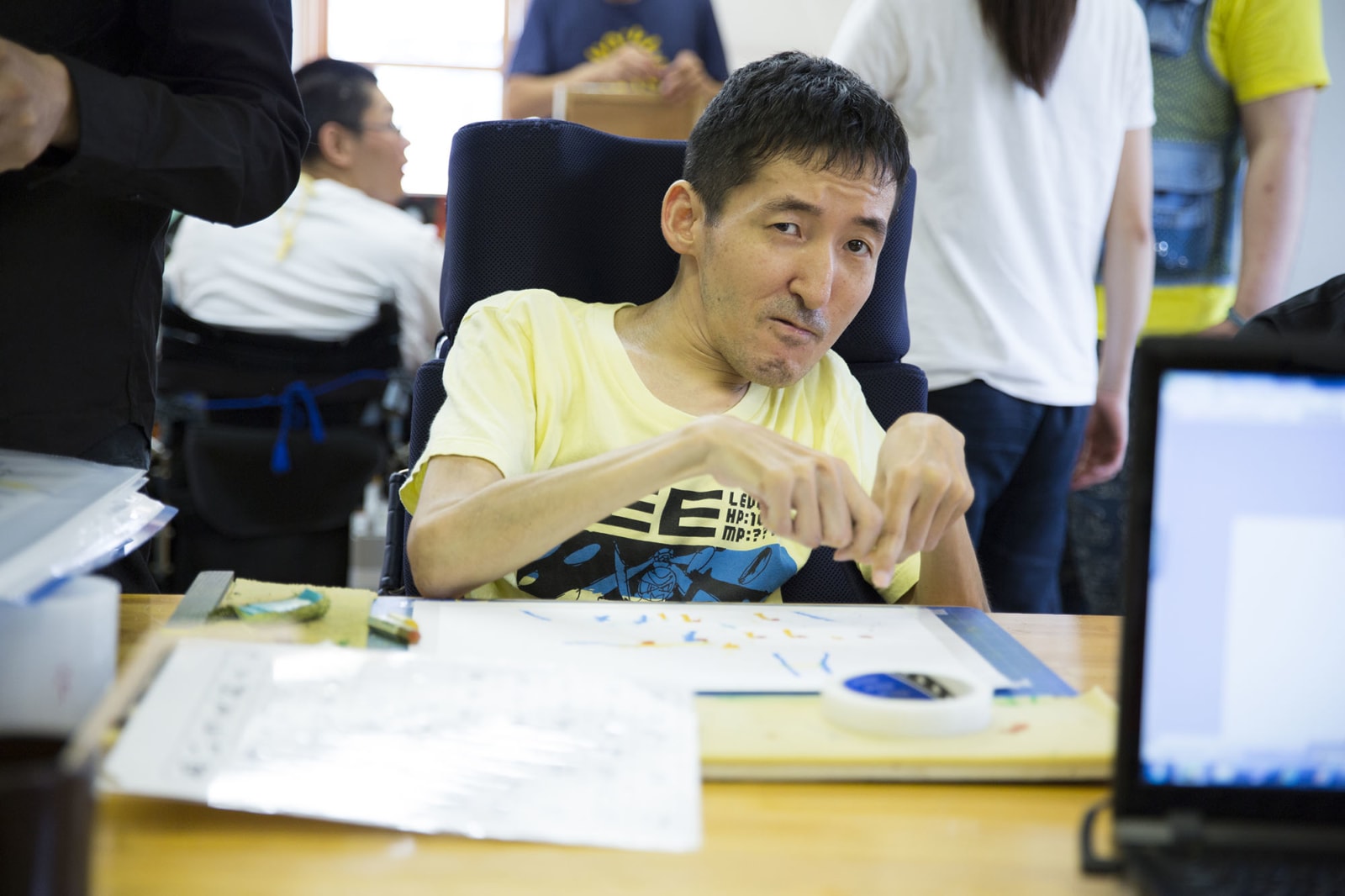 Techniques, motifs, colors, materials . . . everything in flux from moment to moment, as if reflecting the artist’s emotional state. Who is this creator who ‘draws what he feels, just as he feels it’?

This article is a translated version, which was originally published in Japanese language on 24 August, 2018.

Since he was a child, NAKAMUTA Kenji loved to draw. In his student days, he studied watercolor painting. After graduating high school, he drifted away from artistic activity for a time after joining a workshop where he was responsible for weighing and measuring in confectionery production. But his family were determined that he should have the chance to do what he wanted to do, and with their help he joined the atelier 〈maru〉and started to draw once again. Here, the genius that his family had always seen in him could truly blossom.

〈maru〉has more than 1,500 artworks by Nakamuta, and the range of techniques he employs is truly broad. Monochrome sketches from life in charcoal pencil; vibrant drawings of figures reminiscent of Captain Tsubasa, Kinnikuman, and other comic book characters old enough for Nakamuta to have read their stories in elementary school; watercolor works with a certain humorous feel . . . His colored pencil drawings layer color on color to emphasize shadows, just like a watercolor, creating an utterly lyrical effect. When Nakamuta went with his family to see an exhibition of works by ONO Katsuhiko, the artist and poet who paints with a prosthetic hand, he was greatly influenced by Ono’s style, and began producing works that included written text. This ever-changing approach was noticed even by the other〈maru〉members creating their own art.

In Search of an Artistic Ideal

Nakamuta’s works are also notable for their unique titles they have.《Pyuru》, 《Tamiha》, 《Hidarisese》 . . . The words themselves appear to be meaningless, but read aloud they do have a certain pleasing ring. Nakamuta uses a letter board without hesitation to convey these titles to staff. When I ask him what they mean, he only grins.
‘The titles sometimes stay with you longer than the works themselves,’ says IKENAGA Kensuke, a staff member who has known Nakamuta for a long time and is clearly impressed by his achievements. ‘I think he has a unique sense of putting words together.’

About ten years ago, Nakamuta reportedly told his fellow atelier members and staff, ‘I want to draw what I feel, just as I feel it.’ And, true to his word, his motifs and techniques change moment by moment, as if tracking his own feelings day by day.

Once, for example, he was asked to provide illustrations for a children’s book called “The Gift of the Snail.” The editor made the offer to Nakamuta as a fan of his early monochrome drawings of animals, but by that point Nakamuta had moved on to symmetrical patterns and abstract designs with text, executed in watercolor. After reading the book with Ikenaga, Nakamuta put his ideas in order and began to draw. But, no matter how many works he produced, none of them came out in the style the editor had requested. As the deadline drew closer, the atelier’s staff spoke to the editor, and in the end it was decided that Nakamuta would submit illustrations in the vibrant watercolors he was working with then.

‘Right before the deadline, the author came to the atelier to say hello,’ Ikenaga explains. ‘When she saw Nakamuta’s works she was enraptured by them. The other staff members and I were feeling anguished and uncertain because we couldn’t give the editor the style of picture they’d asked for, but the important thing for an artist is to paint what they want to, how they want to. So, as much as pictures in the originally ordered style were preferred, we understood that Nakamuta’s current technique, his current style is always “Now” for him, and always changing. That was very important.’

Of late, Nakamuta has reportedly been doing more abstract work in crayons. No doubt he will continue to follow his muse, reinventing himself many more times and spreading his wings still further in search of his artistic ideal.

Born 1975, resident in Fukuoka. Began serious artistic activity after joining 〈maru〉 in 2007. Uses a wide variety of media, including watercolors, charcoal pencil, crayon, and colored pencil, and has drawn over 1,000 pictures. Representative works include “The Gift of the Snail” (Sekifusha, author Hayashi Sachiyo).