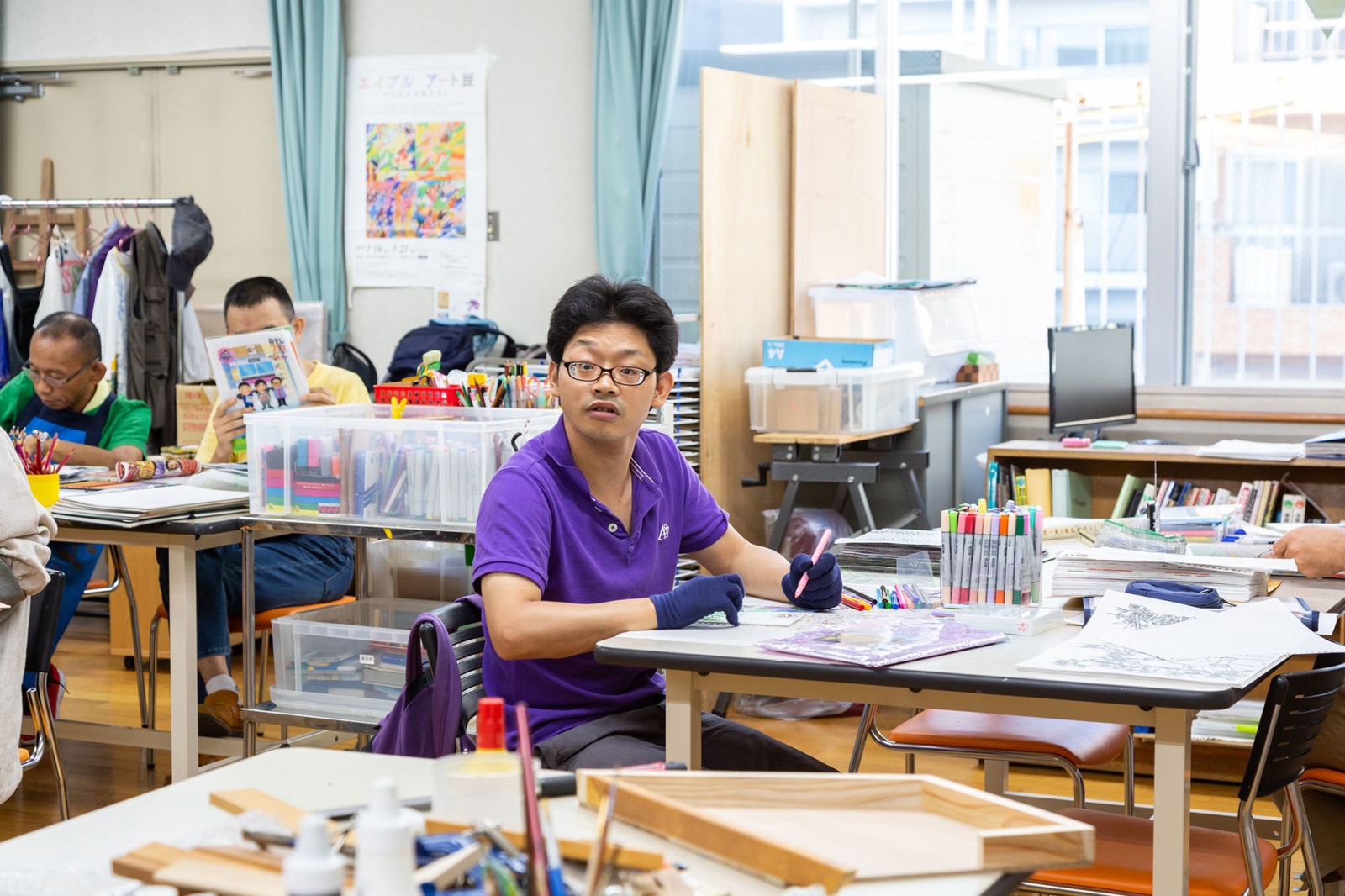 This article is a translated version, which was originally published in Japanese language on 4 October, 2018.

From “Humanity’s Collapse” to “End of Days”

The art club at 〈Nishiawaji Kibou-no-ye〉 meets from 4:30 in the afternoon, but one member arrives early: KURODA Katsutoshi, who immediately begins drawing furiously on loose leaf paper. He looks as determined and focused on his work as a manga artist with a deadline looming. According to staff member Ms. Kanetake, this is not an unusual sight.

Kuroda joined the art club seven years ago. He has always drawn manga (Japanese comic books). Each story takes him about two months to complete, and he always gives them menacing titles like “Humanity’s Collapse” and “End of Days.” Flipping through one thick sheaf of paper, I see severed heads, skeletons pierced by arrows, and a character named ‘Maru-chan’ meeting a particularly gruesome end. ‘Maru-chan,’ it turns out, is MARUYAMA Yasunori, head of the facility. Most of the characters slain in Kuroda’s works are people he knows, but he does not seem to be expressing any personal enmity—although the way he grins and says ‘Of course not’ as he continues to draw is somewhat unsettling. On the day we visited, he drew for the art club meeting’s entire two hours, only pausing once to hold out a piece of paper and ask us to write our names on it. No doubt we’ve already been added to the current story’s body count.

Kuroda does no storyboarding or rough drafts for his comics, which come out instead in a torrent of panels that feel like hand-drawn onomatopoeia. This can make the plot difficult to follow, but the sheer sense of speed is exhilarating. Watching him draw, we can almost feel his hand struggle to keep up with the images in his head.

Another surprising fact about Kuroda’s creative process: he draws the end of his stories first. ‘Thinking about it takes too long,’ he explains.‘But I don’t forget the start of the story.’ His methods seem to create an overwhelming present tense—an instantaneous power pushing his drawing hand toward new imagery. As we come to understand this, his high-speed drawing starts to make sense.

I asked Kuroda what he was working on during our visit. ‘It’s a story where some people survive and some people die,’ he said. Most of the manga he draws are about fighting, historical wartime periods, or school life (excluding campus romance, of course). At first, he says, his manga were ‘just whatever, but in the end they became stories.’ Where does he get his ideas? ‘Daydreams that come to me at work (as a janitor).’

‘There are no happy endings,’ Kuroda says. ‘Happy endings don’t interest me. I’m a destroyer. NAKAI Takashi (who sits next to me at art club) is the pacifist. He’s the one who draws pictures of flowers and stuff. (In my manga) Nakai is the only one who survives. Because he’s the god of peace. He’s an angel. But I’m the god of devils. That’s way cooler. The good guys don’t always win.’

Speaking of cool, Kuroda also mentioned that he has never given any thought to who might read his manga. His creative drive is unalloyed by such petty concerns—a useful reminder that art’s capacity has nothing to do with the comfort of its audience.

At 6:30 p.m., art club came to an end and the self-proclaimed ‘destroyer’ headed home. 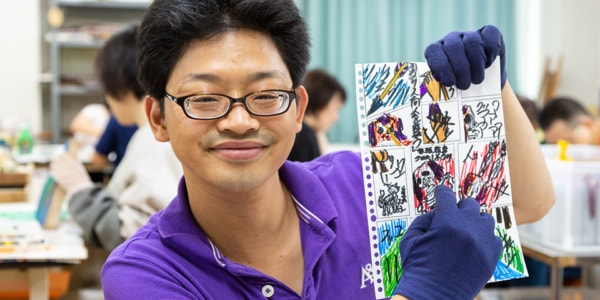 Born 1981, resident in Osaka. Joined the art club at 〈Nishiawaji Kibou-no-ye〉 in 2011. Has participated in several group exhibitions at galleries and universities in the Kansai region since. In 2016, received the AIDA Makoto Prize at POCORART.