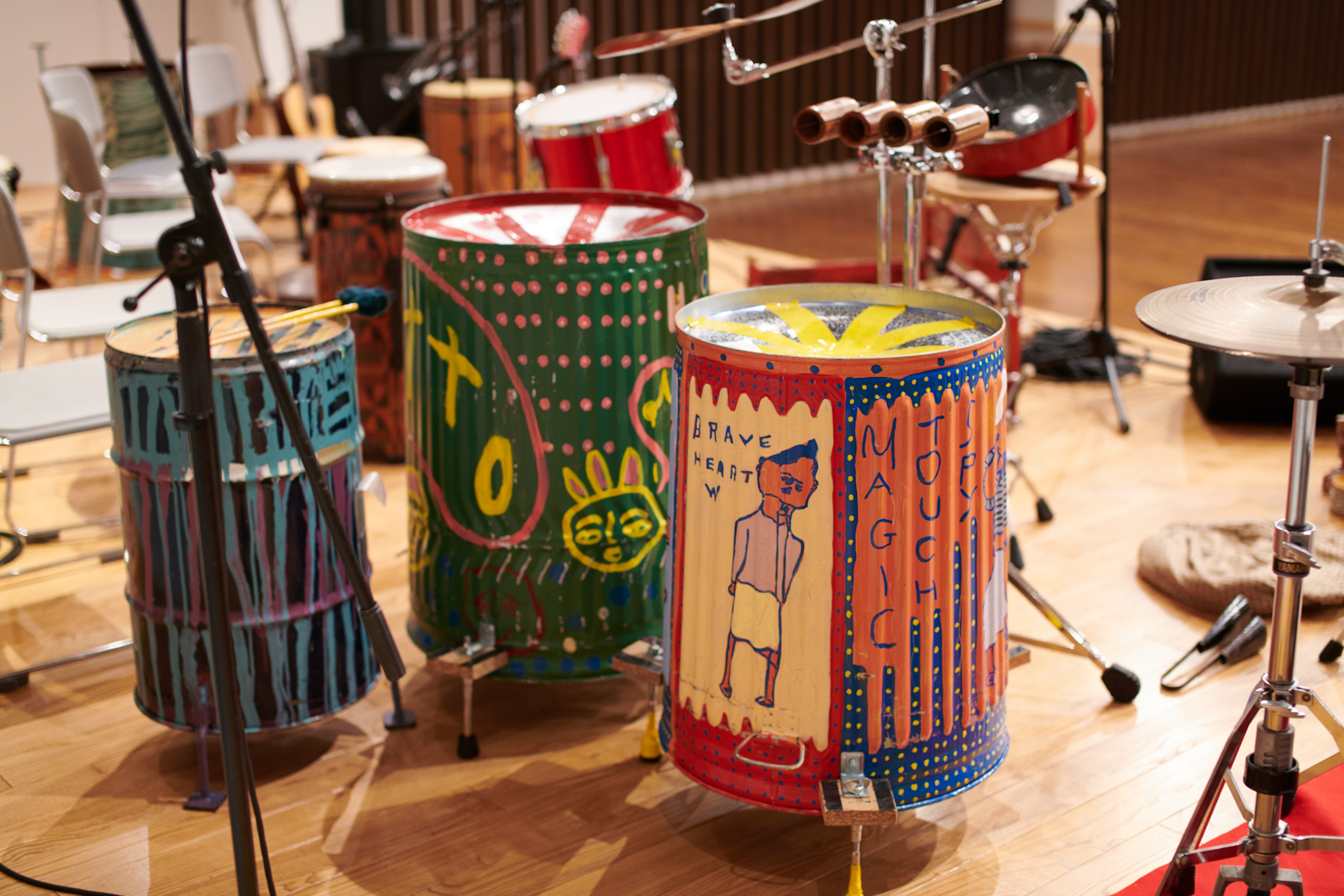 (About this story)
In music, there are moments when sounds become an ecstatic force that transforms the space as soon as the playing starts. A performance group called “otto & orabu” which was formed by members and staff at Shobu Gakuen, facility for persons with disabilities, thrives in these kinds of moments. We visited them in Kagoshima, to find out where they get their energy from.

This article is a translated version, which was originally published in Japanese language on 3 September, 2019.

A conversation that bridges stillness and movement

“It’s been two months since our last practice, does everyone remember?” FUKUMORI Shin, the director of Shobu Gakuen – facility for persons with developmental, mental and physical disabilities in Kagoshima, starts the rehearsal by addressing all the members that have gathered. He is also the conductor of “otto & orabu.” We visited at the beginning of July which was the first day of practice for a performance planned in August. The session started with members gradually playing sounds as if they were verifying each other’s presence through rhythm.

Fukumori describes “otto & orabu” as a “super amateur group.” “Otto” is a percussion group with 23 people, consisting of facility members and staff. “Orabu” which means to “shout” in Kagoshima dialect, is a chorus group of about 8 staff members.

The atmosphere of the rehearsal is relaxed – members jump around, move their hands, and shake their bodies freely. You can feel that everyone is genuinely responding to sounds and are having fun playing their instruments.

Fukumori’s conducting is almost like he is having a conversation with everyone through sound. He faces everyone like it’s a serious match. When he conducts with expressions that are sometimes more musical than the music, members respond with loud, soft, fluid, and uneven sounds accompanied with various movements.

Expressive sounds are mixed together through this fluent exchange. Between stillness and movement, sounds come alive like they are creatures. When you see their performance, you forget who has or doesn’t have a disability and then realize: “Why do I need to even distinguish between the two?”

“Sound energy” that is born out of trust

In between songs, there are games and quizzes such as guessing the name of new members.

“Where did the cameraman for today’s interview come from? 1: Hokkaido, 2: Osaka, 3: Tokyo.”

Such interactions accompany each question and answer causing a lot of laughter.

Every answer, even if it’s wrong, generates playful responses. This makes everyone comfortable and the communication more intimate. This sense of trust enables the members to respond to Fukumori’s conducting and to play sounds without hesitation.

“Today was a light practice” Fukumori told us afterwards. He says that sometimes they will stop playing and start all over when they want to get it right. We asked Fukumori what his criteria for “right” was: “One is to be able to repeat what was really good. Another is to get out an energy that is specific to each member. If this doesn’t happen we will often start over.”

“The ‘right’ thing to do is to deliver energy. This doesn’t have to be loud. Even in soft sounds you can feel when it comes from the heart.” This way of thinking makes it possible for both the people playing and the audience to freely enjoy the sounds. Perhaps this is an ideal form of music.

KI Tomihisa, who plays the Bombo drum said: “I will explain to you about ‘otto & orabu’.”

“It’s shouting but you make that voice round and shape it like smoke erupting from a volcano – that is ‘otto & orabu.’ A miracle happens, things get shaken up, an expression is born, the mood changes, and the forest spirits come together and shout. These are connected with voices of water and insects, nice smells, and as if people are shouting in the forest, the lumberjack comes to work. It has that kind of energy and shape.”

Birth of otto & orabu - an indigenous music that brings diversity and new perspectives.

The birth of “otto & orabu” is closely linked to the history of how things are made at Shobu Gakuen.

Currently there are studios for textile, wood, ceramics, washi / painting and drawing at the Shobu, and each facility member makes art and crafts based on their character. They also exhibit and sell the work made here.

The production process is unique because they include materials that would usually be discarded such as damaged wood, torn cloth, or uneven paint.

Fukumori reflects: “Instead of teaching how to make it polished, if that person is good at making things rough, then as staff we try to think of how to build on this. The staff may suggest: ‘Maybe a rough piece of wood would look good for serving food and sake.’ In this way, we shifted the focus of making things to be original and creative with the help of other’s ideas.”

Another unique character of Shobu Gakuen is that the staff think of what “they” can make and put that into practice.

“Our staff would acquire skills in woodwork or ceramics and make something that the facility members can color. For the facility members, their goals are not to train and achieve something but just to be creative with what they already have. We are taking advantage of how our staff are very motivated to learn and train. We call this combination ‘Shobu style.’ When things don’t match, whatever the staff makes becomes their own solo artwork.”

New sounds that emerge from ideas of creation

In 2001, “otto” was formed out of the same ideas of how they make things at Shobu. “Instead of training for perfection, why not make a new kind of off-rhythm music together with the staff?”

Fukumori was convinced that he couldn’t make music because he didn’t know how to play the piano, so at first, he invited a piano teacher and tried out different methods.

“When the facility members played Taiko drums with Miles Davis playing in the background it sounded really cool, but when it was just them, it was too free and all over the place that you couldn’t listen to it. When we brought in the piano teacher, with some encouragement, it started to take some shape.” Fukumori knew how to communicate and engage people with various disabilities, so he was instructing the piano teacher how to time the notes or match their rhythm. This led to him becoming the conductor.

Fukumori says with a smile: “At first, I was really embarrassed. But as I continued, I started to think that this was not only music, but also theater, and physical expression. I realized that I was seeing common scenes in their daily lives. For example, normal actions for the facility members like playfully splashing in a water puddle, making scratches on a piece of wood in the workshop, shouting somewhere in the facility, were also happening on stage. However, when it happens in a performance, you start to think that the sounds and actions are pleasant, the piece of wood is beautiful, and the shouting is a nice voice.”

Perceptions of music that were established through years of education were completely reset by playing with “otto.”

“My sensibility towards what I thought was a good sound or what was beautiful started to change. For example, older people who are not used to rock music might think that the sound of the electric guitar is unpleasant, but younger people might think its cool. If there is that much difference on how sound is perceived, then there can be that many different kinds of sounds. ‘Do Re Mi’ doesn’t always have to proceed to ‘Fa’.”

It felt like they were making a new kind of indigenous music. Sometimes it is ritualistic and other times it’s for fun. They are playing music for themselves. When listening to these sounds, we can catch a glimpse of how people live their everyday life.

A trigger to change our perception of music

It was 5 years after “otto” started that the staff-only chorus group “orabu” was formed. Fukumori initiated this group with hopes that the staff would be equally challenged as the members of the facility. Since then “otto & orabu” has been active as a percussion and a “meaningless shouting” chorus group.

At first there were many instances before concerts where the roles of the staff and facility members where flipped. “The staff were ‘disabled by the pressure to succeed’, while the facility member where enjoying themselves as usual. These days, the staff are much more relaxed and are able to have fun” (laugh).

Although the music of “otto & orabu” is often thought to be improvised, Fukumori says that this music is not completely free. There are rules in order to maintain a groove with the off-tempo playing and to keep a balance with the overall sound world that they try to create.

The facility members cannot make music on their own but it’s not fun if the staff are the only ones playing. A new world opens up because they coexist and support each other within the diversity they bring.

While watching the performance of “otto & orabu” thinking about such things, their music started to feel like a device that give us a peek into another world. It has a power that makes us enjoy listening on our own terms. The sound of a water puddle becomes pure and a scratched-up piece of wood becomes beautiful. Their music individually triggers a change in each person’s perception of music.

The daily life of members of “otto & orabu”

Everyone returns to their station after rehearsals. As usual, they work hard keeping pace with their own rhythm.

Nakata plays the bamboo xylophone with a big smile. In the “Ceramics Workshop” she makes detailed pieces that have rhythmical qualities. When the staff asked: “What are you making?” she replied: “Feet!”

KI is an impressive Bombo drum player and is a member of the “Woodwork Studio.” He shapes wood using various chisels and hammers away without any hesitation. These pieces are later refined by the staff and sold. In the past, he has made artwork out of carving and painting a whole wood log.

Yoshimori has a distinct way of following the rhythm while posing with his hands crossed. At the “Washi / Painting and Drawing Studio” which he is a member of, Yoshimori draws fish with a primitive feel, which look like tribal paintings. The name of his fish is “Blackhole Ice Thunder Shark.”

Komatsuo plays the violin while dancing around and Seki plays the Djembe drum with a joyful expression on his face. They both work at “Bonta Soba Restaurant” serving customers and washing the dishes. During work, Komatuso is always cool, and Seki seems happy even when he is just walking. 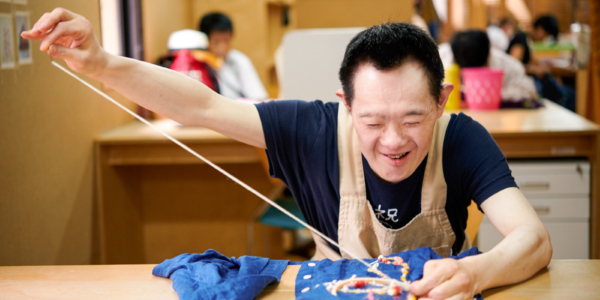 Engrossed in his embroidery work with a gentle smile always on his face, MAENO Tsutomu is a long-time participant in the nui project at Shobu Gakuen (Kagoshima Prefecture). Stubbornly sticking to his own pace, he sews slowly, stitch by stitch, the d… 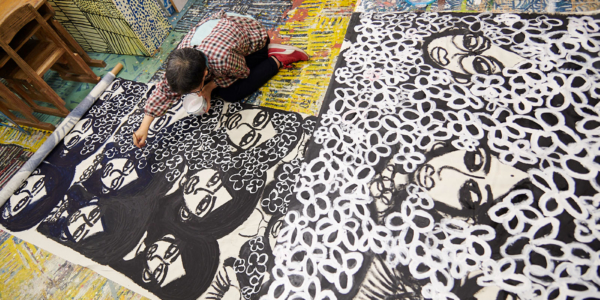