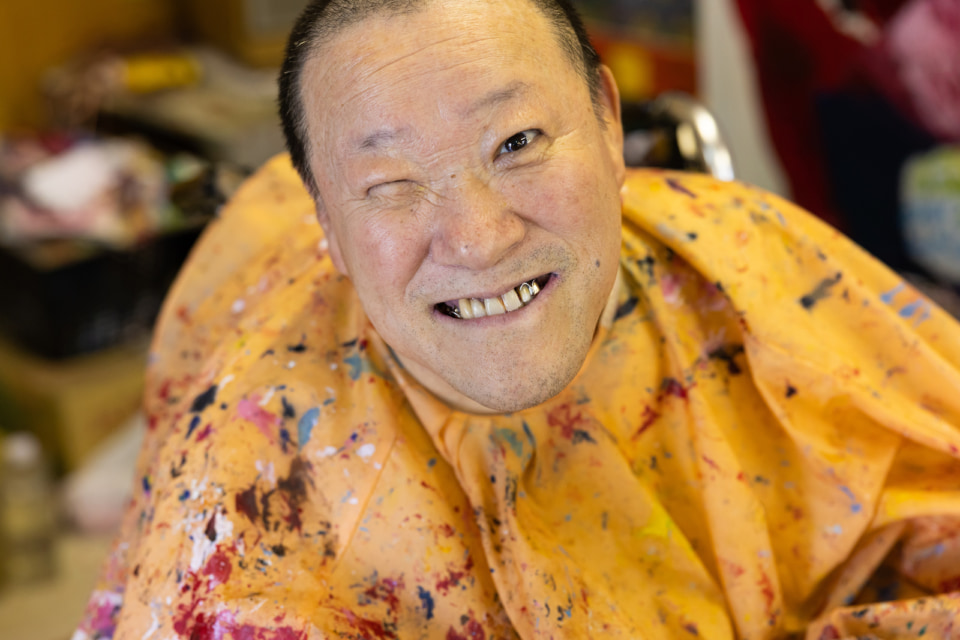 From the last years of elementary school until he was over 40, KAWAKAMI Kenji stayed home drawing. At 43 years old, he came into contact with 〈The Garden of Hope〉, where he encountered oil painting and his talents were discovered. Today, he continues to produce his bold works with the help of a workmate. We visited to catch a glimpse of his world.

This article is a translated version, which was originally published in Japanese language on 24 September, 2021.

The impression produced by Kawakami’s works is of overwhelming red. They appear primeval, giving a sense of powerful vitality. He used to laugh uproariously as he worked, particularly when he first started painting in oils. The splat of his paints hitting the canvas would be enough to crack him up. His works seem to carry the echo of his guffaws even now.

Kawakami was born in 1953. At that time in Japan, children with disabilities were exempt from school enrollment, with the tacit understanding that this meant they would not attend. Kawakami stopped attending school after the upper years of elementary school and has spent his time at home ever since.

He started attending 〈The Garden of Hope〉 when he was 43 years old, after his mother heard about the facility and learned that it runs arts and cultural activities. After meeting Kawakami and learning that he loved drawing at home, facility director MURABAYASHI Shinya suggested oil painting.
“Oils have a bit more depth to them, and I thought they would bring out Kawakami-san’s strengths,” he says.

It was a perfect fit. Kawakami took up oils in 2000, and his oil paintings have now gained a reputation both in Japan and internationally. Before long, Kawakami had earned the title “the Master Painter Kawakami” and built up a portfolio of awards and showings at art exhibitions both at home and abroad. “I want to do oil painting like Kawakami-san” declare his many admiring fans at 〈The Garden of Hope〉, likely inspired by this impressive track record and the appealing figure he presents as he paints like it’s the most fun activity in the world.

Murabayashi and other staff members stay by Kawakami’s side as he creates, helping with steps such as loading his palette with paints and applying the paint to his brush.

Kawakami occasionally uses other colors, but if in doubt—red.
When he wants more paint added to his brush, Kawakami will impatiently declare, “I can’t paint anymore.” “Red as usual?” Murabayashi asks. “Which part are you going to paint? Here with the teeth?” he says as he hands over the paintbrush, helping Kawakami to make his next stroke.

The close relationships that Murabayashi and other staff members have built with Kawakami come across as they support his work. It is clear to see that they enjoy a long-standing relationship of trust, equal and open. The role of the pacemaker running alongside a racer is a perfect analogy. Rather than guiding him, his helpers simply bring out what is already inside him.

The motifs of Kawakami’s paintings include one-time favorite superheroes from the early seventies, friends, staff at 〈The Garden of Hope〉, memories, and occasionally the covers of his favorite records. Based on his painting style, I immediately leaped to the conclusion that these had to be King Crimson, but found that I was way off base: Kawakami’s favorites turn out to be Japanese folk-pop duo Cherish, made famous with their hit “Ladybug Samba.” He also loves the soundtracks from Kikaider and other classic tokusatsu (live action films and TV shows featuring heavy use of special effects) and anime, as well as the Beatles.

“The kind of raw-voiced, pleading shouts that you hear from the sixties-era Beatles seem to strike a deep chord with him,” says Murabayashi. These primal screams appear on Kawakami’s canvases. There is a record player in the studio and everyone’s favorite records are kept playing one after the other as they work. Here, artworks are always accompanied by music.

On the day of our visit, the Master Painter is painting “Kumonga.” This superhero is the creation of a fellow member of 〈The Garden of Hope〉. However, Kawakami is not painting Kumonga in fully-transformed superhero mode, but Kumonga’s creator in the character’s costume, unmasked face visible. Further adding to the mix, Kawakami has a photo of a completely different superhero tacked above his canvas.

“His painting does blend together various elements. Sometimes the same work will combine his memories of the past with things happening now. I think the act of painting itself is the important thing—he isn’t so much concerned with the painting’s final form as with how much he can splash around with his paints,” Murabayashi reflects.

I heard that Kawakami loves to paint large works. He also prefers canvas, which he calls “stretched-tight paper,” to drawing paper.

As vital as ever

In 2008, Kawakami lost some of his mobility and started using a wheelchair. It became difficult for him to hold heavier paintbrushes, so he switched to fine brushes. As a result, the motifs in his works were compressed, but they also gained in sharpness. While his brushwork may have changed, the vitality of his paintings remained the same, and does so to this day.

Working behind Kawakami is IWAMOTO Mana. When I ask her impressions of the “Master Painter,” she replies, “Straightforward.”

“Straightforward in the way that people drawing for the first time just go wild with their crayons. He doesn’t need words. He seems happy when his works are praised but that doesn’t mean that he seeks out that praise.”

Iwamoto says that she can’t draw in this straightforward way herself, and her tone reveals both admiration and appreciation.

A cheer goes up in the studio. When I look over, Kawakami, previously intent on his canvas, is displaying his biggest smile of the day, his eyes sparkling.

Hearing that Kawakami is a huge fan of Abdullah the Butcher and other pro-wrestling “bad guys,” our cameraman ASADA Masashi has shown Kawakami the tattoos on his arms.

Excited over Asada’s incredible tattoos, reminiscent of the pro-fighter style, Kawakami gives us some fan service, imitating the Kabuki theater’s mie (a dramatic pose struck by an actor to underline an emotional climax) and posing with his paintbrush between his teeth. He enlivens the space with an energy to rival that of his works. 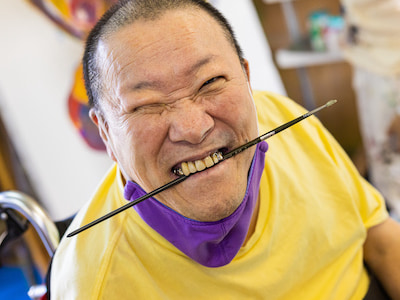 Kawakami was born in 1953 in the city of Matsusaka, Mie Prefecture. He was exempt from school attendance from the upper grades of elementary school onward, and stayed home to draw. He started attending 〈The Garden of Hope〉 in 1997, at 43 years old. He began his oil painting career in 2000. He held a solo exhibition at the Matsusaka City Cultural Asset Center in 2004, and has held many other exhibitions both in Japan and internationally, in addition to receiving numerous awards. His works were selected for inclusion in 2020’s ‘Art As It Is: Expressions from the Obscure’ exhibition (The University Art Museum, Tokyo University of the Arts) and accordingly featured on NHK Educational TV’s ‘Expressions from the Obscure, Vol. 3. 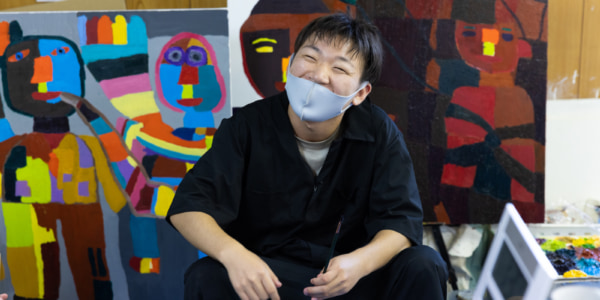 It has been two years since MAENO Ikkei began oil painting, something he had been longing to do for several years. Putting on a favorite record, he paints, dances, then goes back to painting. This article captures a snapshot of the surreal and dream…